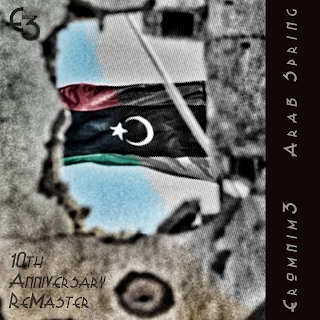 Arab Spring is an EP by Eromnim3 which was conceived in response to the freedom movement which swept across North Africa and the middle east in 2011.The tracks attempt to capture the origins of the movement, the initial optimism and finally the disappointment and dissolution as rulers found a way to contain and quell the will of the peoples.This work was started back in 2011 but was never completed as the group felt that perhaps, as the subject matter was so rooted in the swiftly evolving situation in the early part of the last decade, that perhaps the opportunity to release the material had passed.On revisiting the work as the 10 year anniversary approached the group thought the material would be ideal to complete and issue during this anniversary year.All proceeds will be donated to charities helping with the ongoing decade long crisis in Syria.

Available now via our bandcamp page or click here